No Sewage or Mains Water Connection? If Belfast Planning Committee Councillors are prepared to ignore fundamentals, what do they care about the impact of this development on Belfast’s Built Heritage?

On Tuesday 21st  January, BCC Planning Committee will determine the Cathedral Quarter/Tribeca application; a long running re-invention based on previous failed schemes which is very damaging to the Cultural Fabric of this remaining part of historic Belfast.

Since the transfer of Planning Powers to the eleven NI Councils in April 2015, Ulster Architectural Heritage (UAH) has been increasingly concerned at the scant regard for that adopted duty of care and the resulting accelerated cumulative loss of our architectural built heritage. 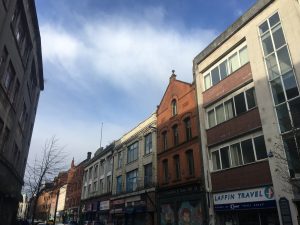 Our stock of heritage buildings, whether listed or otherwise, is as much part of our culture as the Arts, Music, Literature, and topically, Language.

Unlike these elements however, the cultural value of historic buildings depends on their retained physical presence. A demolished building cannot regenerate itself, or the cultural and social history contained in its design, its fabric and its spaces.

UAH and others have strongly objected to this massive and overbearing speculative development, which should have been handled, not by BCC, but by the Department for Infrastructure as a Major Application of regional significance. There has been no explanation from the Department.

The UAH objections are rooted specifically in loss, degradation, and damage of the area’s built heritage, and inevitably that involves UAH looking in detail at the planning process itself.

UAH attended the Pre Determination Hearing for the application on 16th December 2019 and presented our case to BCC planning committee. 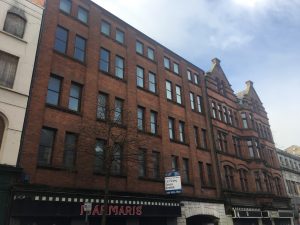 As it had not been addressed by Council Officers, the Committee, the developer, Castlebrooke, or the representative of NI Water in attendance, UAH enquired if this Major development was to receive planning approval without connections to sewage and mains water being available?  The question was simply ignored.

However, three days later, on the 19th of December 2019, NI Water (NIW) wrote to planners outlining the following:

‘Full details of sewage treatment/disposal shall be submitted at Reserved Matters stage, and no development shall take place until a sewage solution has been agreed and signed off by NI Water’.

In addition NI Water suggested that mains water supply might not be available contrary to their now outdated 2017 response.  Poor Mains Water pressure was a factor in the failed efforts to extinguish the catastrophic Bank Buildings fire.

In the NIW annual report for 2019 the Chair of NIW headlines the need for ‘Drains before Cranes’  and two years previously, in February 2018, NI Water stated in relation to Belfast Waste Water Treatment Works  ( NI WWTW Conference)

“We think the absolute capacity of that works with everything running is about 500,000, so we’re out of capacity,”

NIW also highlighted that 20%-30% of sewage never actually reaches the works due to leakage (presumably to groundwater and watercourses).

Reports in the media last week, apparently originating from the developer’s Public Relations company, celebrated that BCC planning committee would approve the development on Tuesday. There was no mention of sewage and mains water provision and the piece appeared to not only pre-empt the Committee’s decision but to treat it as a foregone conclusion.

All of the foregoing is deeply concerning regarding the transparency and accountability of the Council’s planning process.

Cathedral Quarter/Tribeca is a speculative development, one of a number presented last year to overseas investors at the annual BCC sponsored attendance at the MIPM property fair in Cannes.

Did BCC or Castlebrooke advise potential investors that the development had no planning approval and no realistic provision of sewage or mains water connections in, at the very least, the medium term, with NIW needing at least £1bn for Belfast water and sewage infrastructure alone, never mind the long term disruption associated with the necessary works?

Equally worrying is that BCC is apparently oblivious to the danger of breaching the EU Urban Waste Water Treatment Directive and the Environmental Impact Directive in relation to cumulative loss of built heritage cultural assets.  Both these EU Directives will remain in NI Legislation post Brexit. 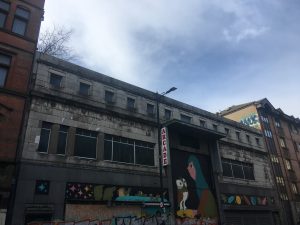 If issues as fundamentally important in the planning process as Sewage Treatment and Water Supply can be effectively ignored for decades by Councils, Government Departments and Elected representatives, how can they be trusted to respect and protect our irreplaceable Built Heritage Cultural Asset?