On Thursday 16th June 2022, a mixture of architects, students and members from UAH and IGS travelled from Belfast and Dublin to descend on Newry for the long-awaited return of the Summer School Study Day. Entitled Newry: A City Rediscovered, our objectives for the day were two-fold: to learn about the history of the border city, and discuss solutions for the long-term improvement of the city. We made Bagenal’s Castle our base for the day, the current home of the Newry, Mourne & Down Museum and we were warmly welcomed by the staff team there, Linda McKenna from NMD District Council and Noreen Cunningham the curator of the museum.

The day began with registration, activity packs were distributed and attendees were treated to pastries, scones and tea and coffee from local Newry bakery The Corn Dolly. The event proper was kicked off with a warm greeting from UAH President Primrose Wilson and a welcome to Newry, Mourne and Down Museum from the curator, Noreen Cunningham. Local architect Tom Gilsenan gave us an excellent overview on the history of Newry’s architecture, a valuable insight for those unfamiliar with the industrial heritage of the city. Dawson Stelfox then joined us from Consarc Design Group to discuss the discovery of Bagenal’s Castle and the steps that were taken to preserve the building in its original condition. He detailed the conversation surrounding whether to restore the building as it once was, or just to preserve the structure as it was rediscovered in 1996, a discussion that shaped our discourse throughout the day.

It was then time to engage directly with the architecture of the city. In the spirit of Leopold Bloom given the date was Bloomsday, we split into two groups and embarked on a walking tour of the city. The groups visited Barre’s Riverside Presbyterian Church and non-subscribing Presbyterian Church; and the Bank of Ireland and Thompson’s Warehouses on Trevor Hill and Heritage at Risk sites on Canal Street and Sandy’s Street. The groups remarked on how Newry retains its characterful 19th century market town structure, without major modern developments. However, the dereliction and underuse of the city center was also clear to see. The tour culminated in a tour of Newry Cathedral with Dawson and John Savage from Consarc. Willing participants were treated to a tour of the roof and an in depth look at Consarc’s work completing proactive water ingress preventative measures to prepare for climate change, whilst the rest of the group remained on firm ground and had a tour of the exquisite mosaics.

Returning to Bagenal’s Castle for a delicious lunch from The Corn Dolly, the group was eager to begin the afternoon’s session. Eddie McParland introduced the session giving his thoughts on Newry and the challenges it faces; his sage advice was warmly accepted by our student group. Consarc again give us insight in the preparative work for climate change before we split into three groups to discuss a variety of topics such as climate change, heritage at risk and infrastructure improvements that Newry desperately needs. The days study concluded with all the group sharing what they have discussed in order for UAH staff to complete a report on our learnings and findings.

The day concluded when our attendees travelled to Marlacoo House on the edge of Marlacoo lake for a barbeque and evening drinks. We met in UAH President Primrose Wilson’s self-designed folly, in rolling native wildflower filled fields. A relaxed evening was then spent in the sun, in beautiful gardens watching swans on the lake, and having further opportunity to discuss architecture, buildings and how we can further work together to further conservation efforts across the island.

Thank you to all of our attendees for coming with us to Newry and making the day a wonderful success. The afternoon discussion just showed the extent of the energy our participants had for making productive change in the city. Thank you to Newry, Mourne & Down District Council and The Primrose Trust for their support which enabled us to make this day possible. Finally, thank you to the Irish Georgian Society for their support and assistance in the organization of the study day. Stay tuned to hear more about our events, as well as a possible return for the Summer School next year! 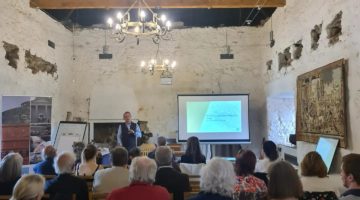 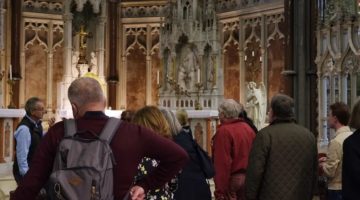 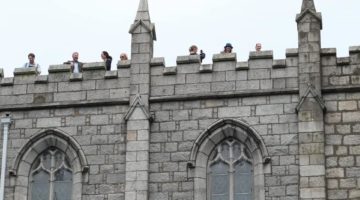 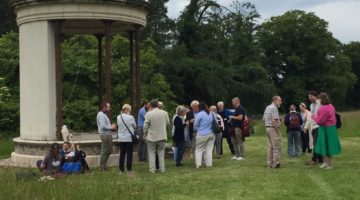