The challenge was to produce an art piece, whether it be Poetry, Prose, Photography, Drawing & Illustration or Songwriting, based on a historic building or place in Northern Ireland. Selected participants would then have the opportunity to work with specialist mentors to develop their work for display or performance at the Heritage Angel Awards. We were overwhelmed by the number and quality of entries to the challenge, and in the end, six entrants were selected to develop their pieces from across the five categories.

If you missed the awards, we would like to give you the opportunity to celebrate their achievement and enjoy the pieces they produced.

Rachel wowed the mentors with her initial submission of St George’s Market, Belfast. Following her work with mentor Marcus, Rachel adopted a looser style and produced an illustration of  the Hillside Pub, Hillsborough. 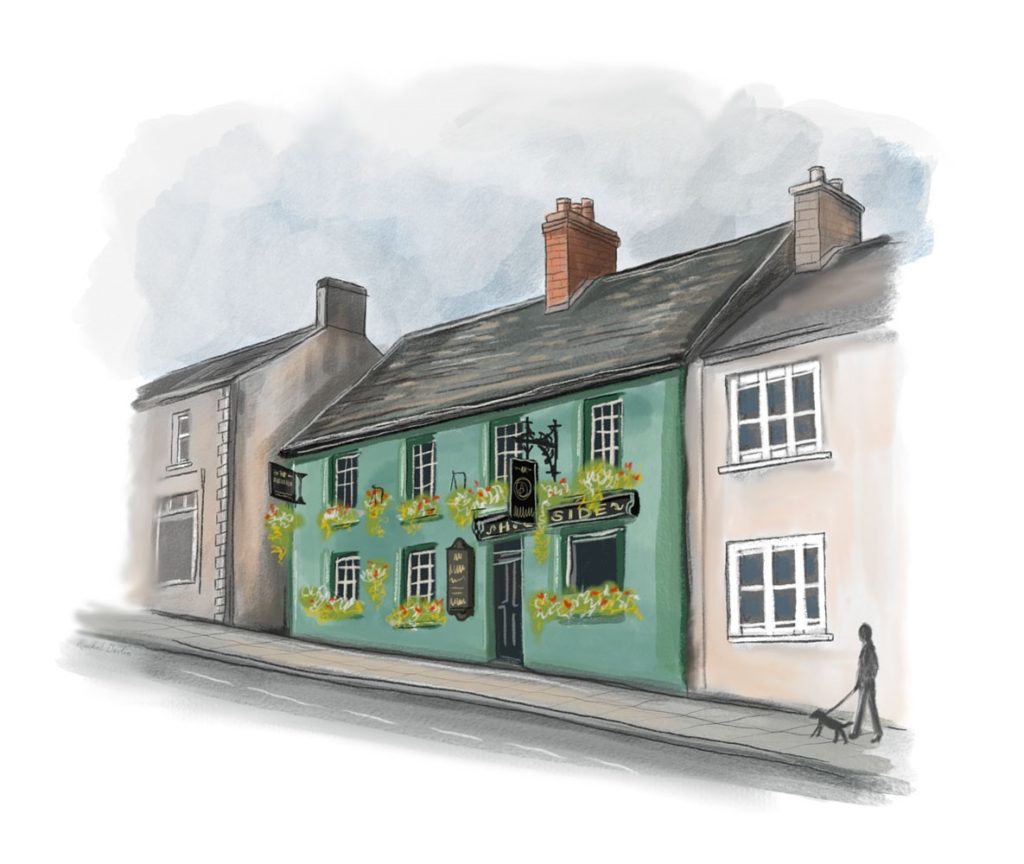 Rosalind was selected to work with Chris based on her submission, ‘Nature Moves In’, a series of images taken in the peatlands of County Tyrone. This included her image of a derelict cottage belonging to a local landowner, a place that had fascinated her for two years before she stopped to get the shot. 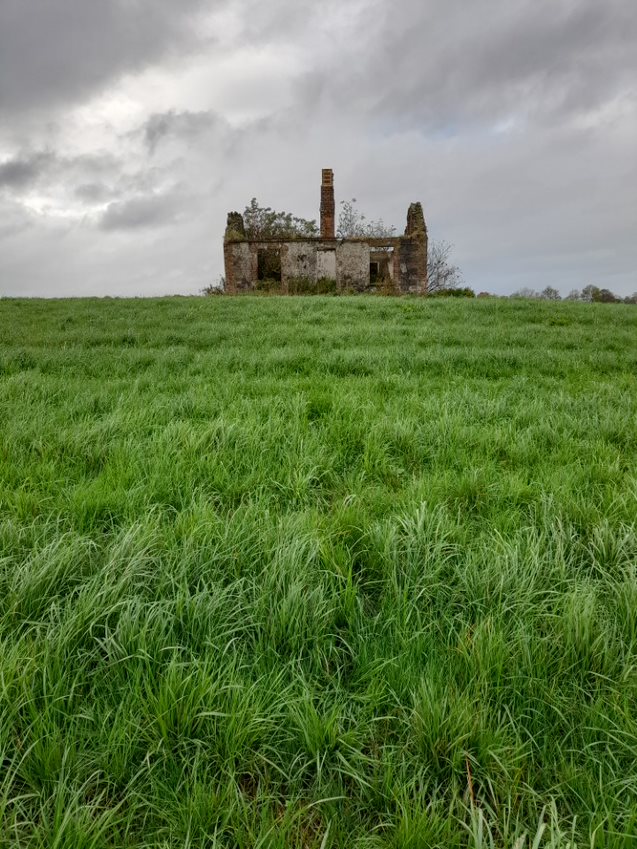 Monika’s initial submission featured the Hidden Village of Galboly in the Glens of Antrim, in which she captured the magical quality of the historic place. Following her workshop with Chris, she produced the work below, entitled ‘Timelessness’ focussing on the juxtaposition of the sculpture and the new buildings. 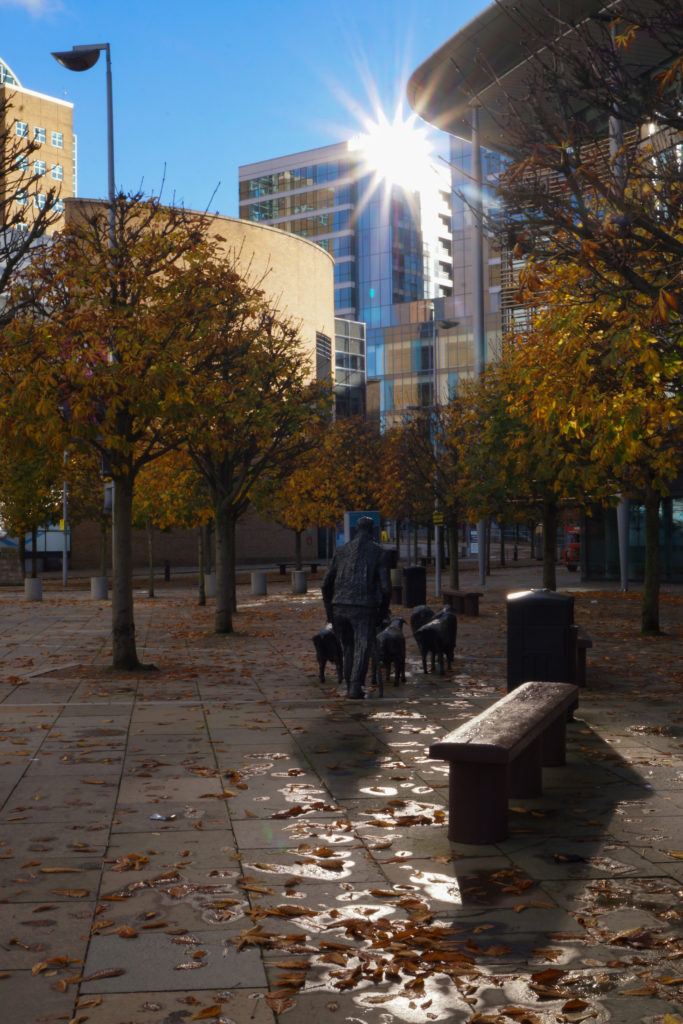 Mary’s entry to the challenge was inspired by Inch Abbey in Downpatrick. She worked with mentor Padraig to sharpen up her submission, resulting in her final piece below. The piece was read on the night of the awards by Helen Mark.

along the stone-flagged cloister.

I pull my cowl around my shoulder.

of my late arrival.

The ebbing moon ponders my dilemma

as stars contest the sunrise.

De Courcy’s missal is not complete.

I must make haste

by Terce he will knock at Scriptorium door

attended by his retinue.

The dye’s run out; the day is dark

my eyes tire and the vellum is ill-prepared

Another dawn, another bus.

They troop through chapter house and cloister,

of this all-Ireland journey.

The silence is broken by

the clicking of a shutter.

What do they know of frozen mornings

the whims of vellum, the foibles of quill

of dark pre-dawn in tower and choir

of ghosts that hover in nave and chancel?

Nor can they plumb the depths

Of Golden Age and Dissolution.

Try they may, but Wikipedia nor tourist guide

can re-engender the Pascal Alleluias

on Easter morn – at Matins

when earth’s and heaven’s antiphons rang out

and awe-struck monks filed in to honour Him

for whom they toiled and sang

Helen’s submission featured Barry’s Amusements in Portrush. She chose to write about Barry’s Amusements because she wanted to celebrate buildings which are significant in people’s lives, which aren’t necessarily the grander ones with strong architectural significance. She worked with Jan to hone her final piece, below. The piece was read on the night of the awards by Helen Mark.

Barry’s Amusements, Fun for all the Family

It isn’t every day your nanna takes off in a bumper car, charging at kids a third of her age. Nanna doesn’t drive a real car and maybe it’s just as well. There’s a man standing next to me at the safety barrier, shouting at boys with hair as blonde as his. “Come on and we’ll get some ice-cream. Can you not see that woman’s mad?”

I’m only nine so I don’t know what nanna’s doing wrong. There’s a sign outside that says this place is for having fun. Yes I know it says Welcome to Barry’s but fun is what it means. What else is the helter skelter for, or the big dipper, or the machine with juddering brown coins that stops just before you win. It’s a cheek for the grown-ups to be annoyed with her, they came to Portrush for the same thing as us. I keep this thought to myself. At school I get in trouble for pointing out the truth.

I finish my candy floss and pull on the sleeve of my granda’s jacket.

“Do you think we should stop her?”

Granda takes a lick of his 99. “She needs to let off steam, pet. We all do in this country.” He tells me things I only understand much later. About the terraced house where next door can hear you breathe and the shirt factory that doesn’t pay a living wage. The years of stitching mean her eyes are getting worse. Library books are the big-print ones and soon she will need CDs.

Nanna sails past, waving like the Queen. She started the day all ladylike in a rose-pink dress, her hair set in mathematically precise curls. Not one hair is out of place but it’s like she’s a different person. She steers the bumper car to a stop and it thumps against the safety barrier.

“Couldn’t miss you.” Granda bites into his ice-cream cone and we wait while he crunches. “Neither could anybody else.”

Nanna laughs and pats her hair.

“You could give the wean a turn,” he says. “Take her with you on the next one.”

I want to go on the carousel, ride a painted horse with a pink princess mane. But nanna says I’m a big girl now and it’s time to go on the cyclone. The arcade smells of doughnuts and the music’s too loud. We spin round and round, faster and faster, until we’re at the window that faces the Atlantic. All I can see is the sea and I’m scared we’ll spin right into it. Nanna tells me not to scream but it’s happy screaming. Granda has got himself another 99. Even he is smiling though he’d probably deny it.

My nanna said I would write a book one day. I’ve never come close but I have written a story. This is it and nanna, it’s for you. Thank you for taking me to Barrys. Thank you for everything.

For John’s submission, he composed a song based on the Tropical Ravine in Belfast. The Tropical Ravine in Botanic Gardens has always been of interest to him, as he is interested in plants from faraway places, and it allows the public the opportunity to see exotic species at first hand. He developed the song by researching exactly what was to be seen on a visit, and then built the lyrics and melody around a light Latin beat which he felt reflected the worldwide aspect of the Ravine. He worked with Brigid to pull out the full potential of the song, which was performed on the night of the awards by Rory Nellis. A recording of John performing his finished piece can be heard below. 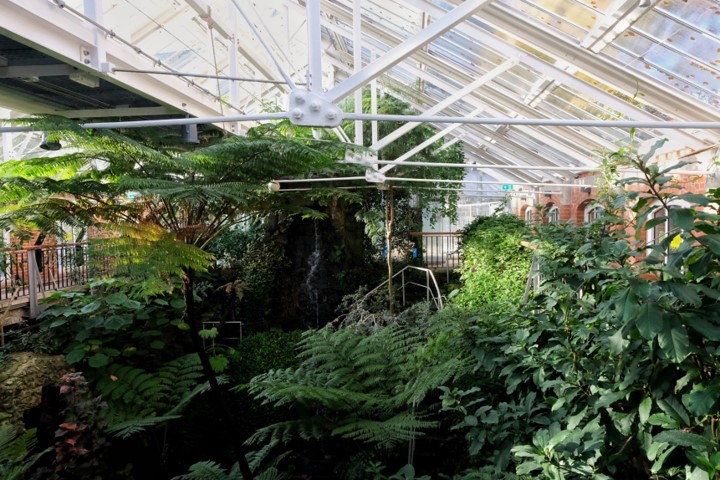 Ulster Architectural Heritage wishes to thank all those who submitted their work to the Heritage Arts Challenge, and to the selected participants and mentors for working together to develop their work. The finished pieces were outstanding and a testament to the wealth of talent across Northern Ireland and beyond.

The Heritage Arts Challenge was kindly supported by the National Lottery Heritage Fund.