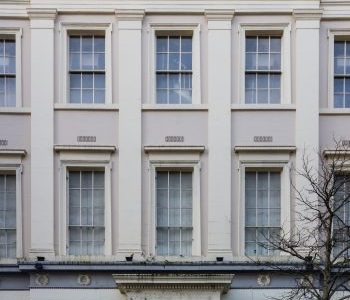 You are here: Home > News > An Appreciation of Dorinda Dunleath by Alistair Rowan

An Appreciation of Dorinda Dunleath by Alistair Rowan 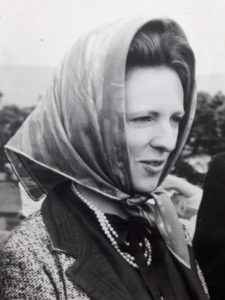 Dorinda Dunleath, who died on 19 March this year, was one of the most engaging, tenacious and original personalities involved in architectural conservation in Ulster. She was part of a group of people that met in Belfast, early in 1967, to consider the need for a voluntary and independent body to protect the historic architecture and the built environment of Northern Ireland. The Ulster Architectural Heritage Society grew out of the group’s deliberations and, since Dorinda herself was ‘in with the bricks’, there can be no doubt that much of the early impact of the society, and its growing reputation as a body to be taken seriously, depended directly on her personal contribution and support.

Born in Belfast, on 15 February 1929, Dorinda was the daughter of Lieut. General Arthur Percival and Betty McGregor Greer of Tullylagan Manor, Co.Tyrone. Strong traditions of service and an army way of life, were fused, from her mother’s side, with the ethos of an Irish landed family and the Ulster linen industry. These were the elements which were embedded in her character. Her father, GOC in Malaya from 1941 to 1942, became a prisoner of war, following the surrender of Singapore, and was held in Manchuria until the end of war with Japan in September 1945. Dorinda spent much of her early youth in Northern Ireland, staying with relatives in Belfast at 5 Green Road, Knock, where she had been born, which meant that she was completely at ease in Ulster, though expressing her own views in a meticulous home-counties accent and retaining, throughout her life, an unquestioning commitment to the British establishment of which she was, indeed, a part.  On 5 December 1959 she married Henry Mulholland, 4th Baron Dunleath and settled down to live at Ballywalter Park, the vast Italian Renaissance house which Charles Lanyon had designed for Henry’s ancestor, the linen magnate and Mayor of Belfast, Andrew Mulholland.

Dorinda’s contribution to the UAHS was twofold: in the first place, as Lady Dunleath, she gave the prestige of her name and that of her husband to the fledgling body, anxious to be accepted and to make its way in centres of power within the civil service of Northern Ireland. It also proved useful that she was close in age to Charlie Brett, the forceful first chairman of the society, whose tendency to dominate the agenda and to steam roll colleagues was moderated, and even held in check, by her presence at committee meetings. No caustic sarcasm from Mr. Brett was ever aimed at Lady Dunleath; she and the chairman got on well together.

The publication of Lists of historic buildings, groups of buildings and buildings of architectural importance, which became the corner stone of the Society’s activities in its earliest years was due in large measure to Dorinda. She would have insisted that her contribution was accidental yet the fact remains that when, in the spring of 1969, the society wrote to Down County Council to enquire what preparations were being made to safeguard historic architecture within the Craigavon area, it was Dorinda and Dick Oram who attended a meeting at the Planning Office and, when officials asked whether the Heritage Society would be prepare to make a list of buildings on behalf of the local authority, it was once again Dorinda, who seeing that not to do so would be spineless, replied immediately ‘yes, we will’. She was a little shame faced on reporting what she had done to the next committee meeting but she had given the right answer, and from her decision the long series of published lists of buildings in different parts of the country followed. Dorinda herself was involved in four of the earliest lists Banbridge, Lurgan & Portadown, Lisburn – all compiled in 1969 – and Downpatrick – very much her home territory – written in 1970 jointly with Peter Rankin and myself. The lists, which involved a lot of driving and a lot of looking, were a huge undertaking for a recently established society and, just as two heads are better than one, so two or even three pairs of eyes saw and and could interpret a lot more of what there was to an historic building than when people were working on their own. The visiting and writing up was time consuming but it was also enjoyable and the corporate activity built cohesion amongst us all.  In the reprint of Mid Down, published in 1974, a total of no less than nineteen lists and surveys is set out at the back of the book.

In a society that has long past its fiftieth anniversary it is hard to recall the energy and enthusiasm of the early days. We believed that the publication of every list offered an opportunity to recruit new members. To this end, the UAHS held an open meeting in each town or area as soon as a list was published, aiming to spread the word and to offer locals an opportunity to learn how important their properties were. Each meeting involved a prior visit to ask shopkeepers to put up posters in their windows and Dorinda was brilliant at this. In Antrim town, planning to promote the Antrim and Ballymena list by Donald Girvan and Dick Oram, she had gone into a butchers shop to introduce herself: ‘I’m Lady Dunleath,’ she said to a startled butcher who simply replied ‘Go on!’ That she immediately shared this story in a pub, after all the posters had gone up, was typical of her subversive sense of humour and the instinctive delight she took when things did not run to plan or – even better – went spectacularly wrong!

A second aspect of the work of the Society, in which Dorinda played a significant role was in the establishment and running of ‘Hearth’, whose cosy acronym, invented by Charlie Brett, stands for Historic, Environmental and Architectural Renovation Trust for Housing. Hearth was set up, early in 1972, as a joint venture between the UAHS and the Northern Ireland Committee of the National Trust. Its first project was the restoration of cottages and almshouses at Seaforde in Co.Down and its work to secure the continuity of groups of characteristic smaller buildings in Ulster, latterly as an independent entity, continues to the present day. Dorinda represented the Society on the joint board of Hearth from the initial planning of the trust in 1971 until well into the 1980s. At the same time she was also chosen to serve as a representative trustee for the Department of Education on the board of the Ulster Museum from 1977 to 1986.

These were the years in which Ballywalter Park became almost the default setting for UAHS events. The house served first as a fine location for lunches or dinners, held to draw the attention of officialdom to important conservation issues and policies of concern to the society, most notably and successfully the urgent need for some form of official government listing of historic buildings.  On other occasions, Lanyon’s sumptuous interior was to provide a unique setting for a range of open days and fund-raising events held freely for the benefit of our members. There were concerts in the central hall, involving a delicate portative eighteenth-century organ on the landing of the staircase, and at least two jazz sessions, billed as ‘the Ballywalter Basement Blues’, both representing the broad range of Henry Dunleath’s musical interests.

On the death of Lord Dunleath, aged sixty in January 1993, Dorinda’s long connection with Ballywalter Park had to end. She did not leave the Ards peninsula but valiantly decided to create a miniature domain for herself at Killyvolgan, close to Ballywalter, developed from the layout of a pre-existing nineteenth-century farmhouse. Though not lacking in engagement with local cultural and conservation issues, the final twenty years of Lady Dunleath’s life were cruelly restricted by the progressive yet long delayed threat of her inevitable blindness. She bore her severe disablement with patience and even a grim sense of mirth, joking about incidents occasioned by her near blindness, until that became total, which meant that she could no longer continue to live in her own house. She was a resident in the Somme Nursing Home, Sydenham, Belfast when she died earlier this year.