Go to Directory
You are here: Home > Plasterwork and Renders 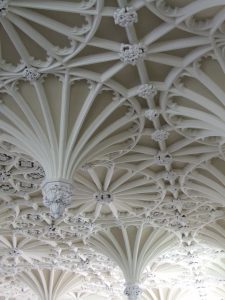 Until the 1930s lime based plasters were standard and so most old buildings are plastered internally with three coat lime plaster, either directly onto the brick or stone (on the hard) or on horizontal laths on timber framing or joists. The backing coats were generally reinforced with hair or vegetable fibres (fibrous plaster) especially the fine, run (made in situ) cornices which were common even in modest buildings. Decorative plasterwork of the eighteenth and nineteenth century can be quite stunning.

Excessive movement in weakening ceiling joists causes cracks, and damp penetration can crumble the surface. Both problems cause the plaster to detach from the laths and eventually fall off. Lath and plaster ceilings and walls are difficult to patch and much fine plasterwork has been lost through lack of timely maintenance. Rot in supporting timbers has long been the excuse for wholesale stripping out of plaster but non-destructive methods are possible combined with the removal of the source of the problem and the insertion, where necessary, of ventilating voids. At the very least cornices and ceiling roses can be securely fixed and repaired in situ.

Cornices, roses and other features are all available as pre-formed mouldings and good plasterers can make up and repair run mouldings. Most fibrous plaster companies can replicate the patterns of cornices and ceiling roses from damaged work or make models from contemporary properties.

For repairs to ordinary, as well as more important historic buildings, plaster made from lime putty and fine sand should be used. In certain circumstances, for example where a wall is very damp, it may however, be expedient to use a bagged, lime based plaster, such as Limelite from Tilcon which retains some degree of ‘breathability’ and flexibility after setting.

External renders vary from simple work lined out to resemble stonework, to elaborate stucco pilaster cornices and mouldings. Early examples are in lime based render but by the midnineteenth century ‘Roman Cement’, a naturally occurring clay and lime mix, was the most common material; it is not available today. 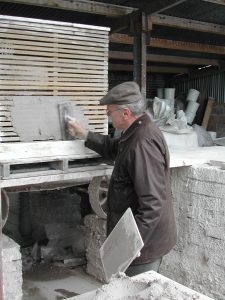 Renders are subject to thermal stresses and movements in the building fabric. In order to accommodate such movement without cracking and to allow water which is drawn into the fabric to evaporate off, renders, like plasters, should always be lime based. The addition of cement as a gauging material, although common place, is not generally regarded as good conservation practice. In any event, the proportion of cement to lime should not exceed 1:2. If the mix is too cement strong, it will crack, let in water which is unable to escape and eventually detach from the wall.

Many renders contain a stone aggregate. Dry dash, or pebble dash, where the stones are flung on to the wet base coat, is an inappropriate finish for any historic building. A traditional wet dash, where the aggregate is mixed into the render before it is applied to the wall is more suitable. The exact size and type of stone and the texture and colour of the sand used is critical and should be matched to the original work where possible.

Traditional smooth rendered walls, sometimes with ‘ashlar’ lines marking the ‘courses’ to resemble stone, were intended to be painted, unless it was already self-coloured by the addition of coloured sands in the render mix.

The successful use of renders and plasters made from lime putty without the addition of cement requires particular skills, both in their specification and their application and after-care on site.