On 5 December 2018, the Royal Institute of the Architects of Ireland welcomed Primrose Wilson CBE as a new RIAI Honorary Member in recognition of her commitment to architectural heritage in Ireland.

RIAI Council awards Honorary Memberships to individuals from a wide range of professional backgrounds for their contribution to the built environment, while Honorary Fellowships are presented to those with an architectural background. RIAI CEO Kathryn Meghen said: “We are delighted to make these awards to recognise the contribution of colleagues and collaborators in driving excellence in the built environment”. 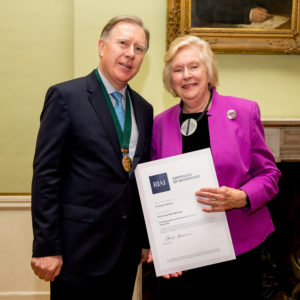 In awarding the Honorary Membership to Primrose Wilson, CBE, for her contribution to architectural conservation, RIAI President David Browne said: “For many years Primrose Wilson has made, and continues to make, a major contribution to the advancement of architectural conservation on the island of Ireland. She has played a significant role as a communicator, advocate and enabler in cultivating positive and constructive cross-border relationships. This contribution is reflected in her commitment and achievements as Chairman of the Ulster Architectural Heritage Society and Founder and Chairman of the Follies Trust. Primrose Wilson initiated and organised European Heritage Open Days (EHOD) from 1997-2001. The ‘Home and Dry’ programme, which she ran over several years in counties north and south of the border, brought together professionals, building owners and local communities around ostensibly simple issues such as maintenance, but has had profound benefits and legacies, including a greater awareness of a shared heritage.” The Citation for Primrose Wilson was read by Architect James Howley, FRIAI.

Primrose has been President of Ulster Architectural Heritage since 2016, and has for many years played a key part in our activity. Most recently leading the introduction of the UAH ~ IGS cross border, ‘Conservation Without Frontiers’ Summer School Programme in 2015. We would like to express our thanks to Primrose and congratulate her on receiving RIAI Honorary Membership. A fitting accolade in recognition of Primrose’s dedication to architectural heritage in Ireland over many years.