You are here: Home > News > On Song to Celebrate Historic Derry~Londonderry

On Song to Celebrate Historic Derry~Londonderry

Unique performances, focused on the Derry Walls, the Shirt Factories and Austin's to take the stage for Northern Ireland’s Heritage Angel Awards at Guildhall Derry~Londonderry on 6th November.

The Heritage Angel Awards, celebrating achievement in rescue, repair and recording of our built heritage are part of a UK awards initiative, supported by the Andrew Lloyd Webber Foundation. The second of 4 awards ceremonies happening across the UK in 2018. 15 projects and the people behind them have been shortlisted across 5 categories. We are pleased to announce that popular ‘Heritage in Song’ is back for a second year to bring a unique sense of celebration to the event. 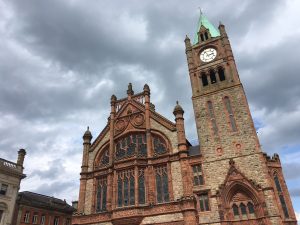 Renowned local songwriters Eilidh Patterson and Eoin O’Callaghan aka, Best Boy Grip, will be working alongside critically acclaimed Co. Down singer songwriter Brigid O’Neill, to debut especially composed songs about some of the city’s most historic buildings when the Northern Ireland Heritage Awards come to the Guildhall next month.

Led by Brigid O’Neill, the Heritage in Song project aims to combine music and heritage to raise awareness of some of Derry’s most historic sites. Local singer-songwriter Eilidh Patterson will perform a song about the Derry Walls, Eoin O’Callaghan, Best Boy Grip focuses his piece on Derry’s shirt factory history and Brigid O’Neill will be performing a song about the exuberant Edwardian Austin’s Department Store, and its story.

Labelled in 2017 as the ‘Heritage Oscars’, the Heritage in Song element makes these awards like no other. Ulster Architectural Heritage are grateful for the input of such notable performers, and support of The Honourable, The Irish Society and the Acorn Fund for the Heritage in Song aspect of the event.

Brigid says “I am so pleased to be running this special project with the UAHS again this year after the huge success of last year, where our original bespoke songs reached out to a wider audience of music lovers to raise awareness about our heritage. We are especially delighted to have the very talented Eoin O’Callaghan and Eilidh Patterson on board this year, and are really looking forward to depicting the fantastic heritage of Derry through our songs”. 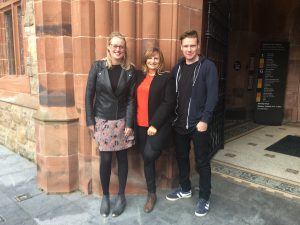 The Heritage Angel Awards aim to celebrate the efforts of people who go to extraordinary lengths to protect, save and share their local heritage. We will also be joined at this special heritage night will by Glenn Patterson, Joe Mahon and Deirdre Heenan. A limited number of tickets remain. Find out more about the Heritage Angel Awards Shortlist at www.heritageangelawards-ni.org.uk. Book your free tickets now at: ulsterarchitecturalheritage.org.uk/events

The Awards administrated by Ulster Architectural Heritage are supported by the Andrew Lloyd Webber Foundation, Derry & Strabane District Council and the Department for Communities will celebrate those working tirelessly to preserve and maintain Northern Ireland’s historic buildings and places.