You are here: Home > News > Heritage Half Term. Bake A Building ~ The Big Building Bake Off.

Heritage Half Term. Bake A Building ~ The Big Building Bake Off.

A baking challenge like no other! Join UAH for Heritage Half Term at St. George's Market on Monday 29th October 2018. See the built heritage bakes at Bake A Building ~ The Big Building Bake Off, stalls, entertainment for all. 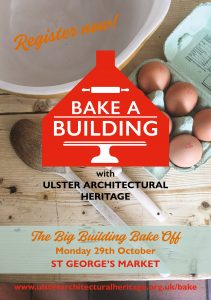 Ulster Architectural Heritage and Food NI have called on– professionals, amateurs, kids, school groups and organisations- to choose their favourite historic building, and BAKE! The project aims to use the popular medium of baking to encourage people, of all ages, to take a closer look at our architectural heritage. The winning entries will demonstrate excellence in detail and taste. Judging by celebrity chefs: BBC’s Paula McIntyre, Jane Allen, Jane’s Kitchen & Finbar Haughey, Andrew Ingredients at St. George’s Market on Monday 29th October.

‘Architecture is often looked at through creative mediums of the arts – in painting, drawing, sketching, poetry, design. In this case we are asking all the bakers to translate what they see in the physical detail of buildings into a creative representation in cake. We are asking them to look closely at the buildings that form such an important part of our towns, streets and cities. We are also asking participants to make those buildings taste great!’ Nicola McVeigh, Chief Executive of UAH.

Categories include best amateur, professional, group, under 16 and primary/secondary school class. 35 have signed up to bake Northern Ireland’s built heritage. Each will produce their interpretation of a different building. Entries include: Belfast City Hall, the Albert Clock, Transport House and the Strand Cinema, and many others across Northern Ireland. Entrants include the National Trust Team at Castle Ward, the Titanic Foundation, Titanic Drawing Offices and in the professional category French Village will be baking Belfast City Hall. Baking the Lanyon Building at Queen’s its Jamie Smyth architecture graduate, brother of the NI Great British Bake Off finalist 2016, Andrew Smyth. 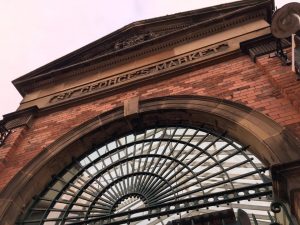 The cake creations will be displayed and judged, and winners announced on 29th October from 12-3.00pm. There will be a Tea Party for the announcement of the winners at 2pm. Everyone is invited to the fair and family fun day at St. George’s Market. It will be a free family event with entertainment, stalls selling local crafts and produce, and a chance for the public to view the cakes and learn more about the work of UAH and the importance of preserving architecture for future generations.