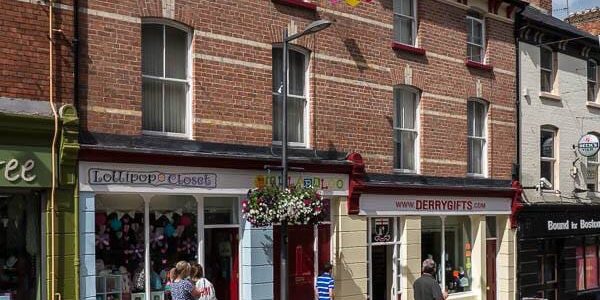 Foyle Civic Trust, part of the Walled City Partnership, Derry has been crowned overall UK winner in the 2018 Heritage Angel Awards for their work restoring and regenerating the historic city centre in a scheme known as the Townscape Heritage Initiative (THI) the main funder being the Heritage Lottery Fund. This has attracted more than £10 million over recent years and resulted in more than thirty buildings being restored to become attractive useful assets once again breathing vitality and optimism back into the city centre.

Members of the Trust were presented with the Award by Lord Andrew Lloyd Webber at the Award ceremony last night in the Gillian Lynne Theatre, London. The project was chosen from twenty finalists from England, Scotland, Wales and Northern Ireland after previously winning the Best Major Regeneration of a Historic Building or Place for projects in excess of £2million category in the local stage.

‘It has been a huge pleasure to work with the Andrew Lloyd Webber Foundation to bring the Heritage Angel Awards to Northern Ireland. Over the past two years Ulster Architectural Heritage has been overwhelmed by the volume and quality of applications received from across the country. I am particularly delighted that one of our regional winners, Foyle Civic Trust, and the Walled City Townscape Heritage Initiative has now been crowned the UK winner. Our built heritage is a hugely valuable asset that has the potential to be a powerful tool for social cohesion and economic regeneration. It is a culture and a heritage that knows no boundaries which is part of the everyday experience of everyone. It creates a sense of place and even a feeling of pride which is of course so evident in our very worthy winners. The Heritage Angel Awards have without doubt contributed to a renewed appreciation of our built heritage across Northern Ireland.’

‘I am especially pleased that we have tonight crowned the Foyle Civic Trust, part of the Walled City Partnership in Derry, Londonderry as the first overall UK winner. This project benefits the local community and shows how individuals, volunteer groups and local councils can work together to regenerate our heritage. I wrote a musical called “The Beautiful Game” about the needless violence in Northern Ireland and what this project has done in Derry struck a chord with me, as I think it did with all the judges.’

About the Heritage Angel Awards NI

The Heritage Angel Awards have taken place in Northern Ireland since 2017. They celebrate the efforts of local people, either individuals or groups, who have rescued, researched or recorded historic buildings and places.

The awards are administered by Ulster Architectural Heritage (UAH) and the main funder is The Andrew Lloyd Webber Foundation. UAH organise a consortium of heritage organisations who contribute significantly to the Awards through a steering and judging group. These organisations include: Heritage Lottery Fund NI, Department for Communities , Historic Environment Division, Construction Industry Training Board NI, Institute for Historic Building Conservation, Heritage Trust Network and the Centre for Archaeological Fieldwork. In 2018, the awards have also been supported by Department for Communities and Derry City & Strabane District Council.

UAH is a charitable, membership organisation founded in 1967. It exists to promote appreciation, preservation and conservation of architecture across the nine counties of Ulster. Over the last 50 years UAH has established itself as a fearless campaigner for buildings of merit, a generous resource of information on local architecture, and a fair and helpful source of advice. Its main activities include campaigning & lobbying, support & advice, publications and events. UAH works with the Historic Environment Division, (HED), at the Department for Communities, (DfC), to record and promote the conservation of buildings at risk through the Heritage at Risk NI, (HAR) partnership. www.uahs.org.uk

In 2010, the Foundation embarked on an active grant giving programme and has now awarded grants of over £19.5m to support high quality training and personal development as well as other projects that make a real difference to enrich the quality of life both for individuals and within local communities.

Townscape Heritage Initiative, or (THI) is the title of an HLF funding Initiative, with projects delivered by people, and communities for townscape heritage regeneration, in towns and cities across the UK. In this case, the Walled City THI scheme was created from the recognition that a legacy from the recent troubles was the destruction of historic buildings around Derry’s walls and the perception that repairs were a short term measure with owners aware of the possibility of further damage. It was against this backdrop that the THI scheme emerged, recognising that Derry’s built fabric was an asset to the city.

The purpose of the Townscape Heritage Initiative was to enhance the visual appearance of the environment as well to improving the physical, economic and social conditions of the Conservation Area in which the scheme operates. The objective being that the areas may succeed as retail, cultural and residential areas, with an emphasis on vibrant mixed use economy, providing a safe and attractive environment in which to work and live while injecting a pride of place and supporting independent shops and small businesses with unique identities and styles.

To date THI have facilitated the repair and restoration of over thirty historic properties with the aid of grants from the Heritage Lottery Fund and other key funding bodies.

Derry City and Strabane District Council joined with the Foyle Civic Trust in the Walled City Partnership to help to drive forward the THI. One of eleven Council areas in Northern Ireland, it has a rich built heritage. It encompasses an area of 1,341 square kilometres and is home to a population of 147,720 people. Derry is recognised as the regional city in the North West of Northern Ireland, is the second largest city in NI and is the only remaining completely walled city in Ireland. The city has a unique connection to the arts and literary world – befitting its designation as the UK’s first ever City of Culture 2013. The District’s Sperrin Mountains are Northern Ireland’s largest and least explored mountain range and are a designated area of natural beauty. Derry-Londonderry and Tyrone and the Sperrins are designated as NI signature tourism destinations. Information on Council services and initiatives are available at www.derrystrabane.com