You are here: Home > News > Blaze at Historic Builder’s Yard, Another Bulldozed Building.

On the night of Sunday 24th June, fire broke out in an historic building at 163 Ormeau Road. Part of the property known locally as the Old Builders Yard, the 130 year building was formerly the headquarters of renowned Belfast construction firm H&J Martin, one of Northern Ireland’s oldest construction companies. Meanwhile the decimation of the architectural character of Ulster continues unchecked.

The building, although surprisingly not listed, was, however, located in a Belfast Area of Townscape Character (ATC). This designation recognises areas of cities, towns and villages that exhibit distinct and valuable historic character. ATCs introduce control over the demolition of unlisted buildings, particularly those such as this that are of historic or architectural importance. 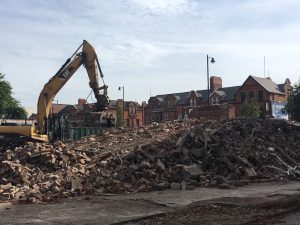 The building c.1879 and yard was formerly the headquarters of H&J Martin, the renowned Belfast construction company founded in 1840 by the Martin family. The premises at 163 Ormeau Road were perhaps not as widely known as their distinguished history merited, given their importance as the headquarters from which H&J Martin masterminded the construction of Belfast City Hall in the early years of the 20th century. The firm’s legacy includes many other Ulster landmarks including the Ulster Museum, The Grand Opera House, Elmwood Hall, and further afield, buildings such as the magnificent Slieve Donard Hotel in Newcastle and the construction of water courses at the Silent Valley to provide water for the people of Belfast.

In January 2018 Belfast City Council granted permission to H&J Martin, merged since 2015 into the Lagan Construction Group, for the development of the site for residential use in the form of 7 townhouses and 40 apartments. In accordance with the designation and associated policy, no.163, an important unlisted building within the ATC, was to be retained, with change of use, as part of the approved plans.

Redbrick, with cut and carved sandstone detailing, this distinctive building enhanced a prominent corner site at the Ormeau and Rugby Road junction and was the epitome of quality construction that would be expected from a firm of master builders. The approved application for development saw the 2 storey building retained with its character and position on the corner of Ormeau and Rugby Roads respected by the design of the new 3 and 4 story terrace buildings on the rest of the site. The proposed retention of no.163 also complemented the character and setting of the listed Hatfield Bar opposite and nearby historic terraces. 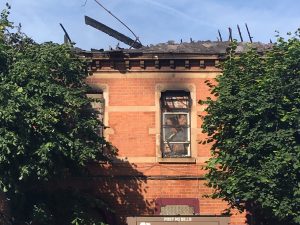 In accordance with the approvals, demolition of other buildings immediately adjacent to no.163 began last week and clearing of the debris is still progressing on site. The fire struck late on Sunday evening causing damage to the internal structure, windows and roof. However, the external walls appeared to UAH to be largely intact, and visually sound.

UAH was hopeful that exterior of building could be saved, but in the early hours of the 26th June, the building was demolished.

The Northern Ireland Fire and Rescue Service has confirmed the fire as malicious, and as such it adds to the seemingly never ending tally of important Ulster historic buildings lost as a consequence of arson.

As far back as August 2011 the then DoE minister Alex Attwood, clearly concerned by ongoing cumulative loss of Northern Ireland’s irreplaceable built heritage, initiated a ‘Heritage Crime Summit’. Ulster Architectural Heritage attended and applauded the Minister for his initiative. Senior figures from the PSNI and NIFRS spoke and it seemed that a joint ‘taskforce’ would finally start to prioritise the problem.

Seven years have passed since the optimism of the Heritage Crime meetings. To our knowledge no prosecutions have been brought for arson attacks on historic buildings despite the ongoing high number and profile of the crimes. NIFRS forensic reports on the attacks remain unavailable to UAH as exempt under Freedom of Information, making the evaluation of such attacks difficult for UAH. Similarly PSNI and NIFRS liaison with Government Departments on the problem remains vague. 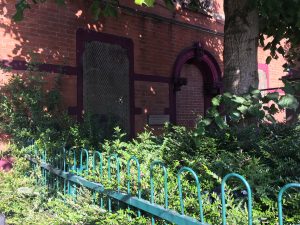 UAH will seek clarification from Belfast City Council on this latest attack on the ‘authentic historic city’. No one should profit, either directly or indirectly from crime and there are procedures to be followed regarding complete or partial demolition and any subsequent planning approvals. UAH now calls for any future plans for the site of former H&J Martin, 163 Ormeau Road to be ‘like for like’ in scale, form height, and material so as to respect the character of the ATC.

Full details of the planning application can be found at: https://www.planningni.gov.uk/ Reference: LA04/2016/2531/F