You are here: Home > News > Attack the Block: Belfast City Council vs the City’s Heritage buildings.

‘Attack the Block’ is a movie title…horror fiction…. but in Belfast there was no fiction, but plenty of public horror, when the demolition contractors attacked the last historic Belfast brick warehouses on the City’s Kent Street/Union Street block, in a not unfamiliar weekend demolition.

The loss of these buildings together with the earlier demolitions in Kent Street and the again ‘overnight at a weekend’ demolitions of three buildings, 95-107 North Street, which were about to be approved for listing (and consequently, statutory protection) by Belfast City Council, complete the clearance of Belfast’s characteristic historic commercial architecture from yet another city block. Only the listed Art Deco Bank on the corner with Royal Avenue remains, damaged, vandalised and at risk. 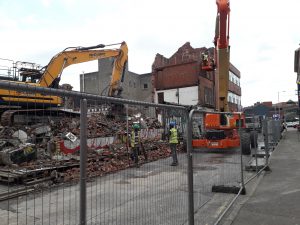 Ulster Architectural Heritage had previously asked the Department for this block to be included in the City Centre Conservation Area but nothing was done. Subsequently we have also requested the council to undertake its statutory responsibility to initiate Environmental Impact Assessments on cumulative loss of historic built assets. Unfortunately the council appears to be in denial of this European Directive.

Not only did this extended attack take place while an apparently disinterested City Council looked on, some of the demolitions were at the instruction of ES North Street, which shares directors with Belfast City Council’s Development Partner, McAleer and Rushe.

The absence of any attempt by the Council, or Councillors, to save these buildings or even to express an opinion, is all the more inexplicable given that the Council’s own ‘City Centre Regeneration and Investment Strategy 2015’ advocates the retention and conversion of historic warehousing to live/work spaces. However, this may not suit the speculative private land-bank based nature of property ‘development’ in Belfast City Centre. It is often difficult even to establish the true ownership of vacant land or to counter expensive developer funded public relations lobbying targeted at Councillors. 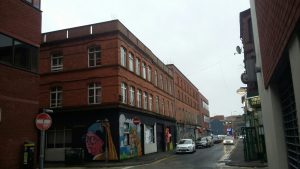 The process of how the Council actually chooses a development Partner, and how, particularly if the chosen company were also a speculator/landowner, does the Council protect the integrity of the Planning process and show itself to be primarily representing sustainable public interest, is not transparent and merits scrutiny.

The relevant Government Departments failure to exercise their scrutiny roles since the handover of Planning Powers to Councils in 2015 is a contributory factor in the ongoing catastrophic loss of unlisted heritage buildings across Northern Ireland.

Ulster Architectural Heritage is monitoring another City block due for attack, and, in an effort to avert another disaster, will put detailed questions to Councillors to be answered in public.

‘Attack the Block’ the movie, was heavily promoted prior to release but crashed at the box office, recouping only half its costs. Perhaps there is a lesson here for Belfast City Councillors.