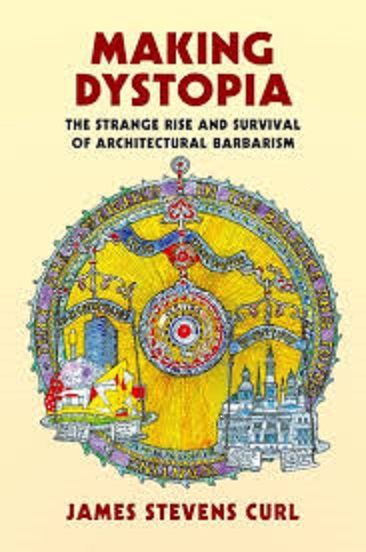 “Making Dystopia, the most gripping and complete account of how architecture and urban planning were corrupted in the 20th and 21st centuries leading to a catastrophic deterioration of the built environment, is a brilliant, thoroughly researched, and completely novel book… This book, surely the greatest of the many written by Professor Stevens Curl, should be read by staff and students in all schools of architecture who are still pursuing destructive, irrelevant, outdated paths, as well as by everyone concerned about the erosion of civilisation itself.” David Watkin, Emeritus Professor of the History of Architecture, University of Cambridge

A cultural and environmental catastrophe; massive destruction, a waste of resources, alien urban landscapes, and the elimination of all decoration and choice: these are just some of the terms used by James Stevens Curl to describe the triumph of architectural Modernism, a movement that came to be almost globally accepted in the years after the First World War.

Drawing on prodigious personal research and a wealth of supporting materials, Professor Stevens Curl traces the effects of the Modernist revolution in architecture from 1918 to the present, arguing that, with each passing year, so-called ‘iconic’ architecture by supposed ‘star’ architects has become more bizarre, unsettling, and expensive, ignoring established contexts and proving to be stratospherically remote from the aspirations and needs of humanity. In the élite world of contemporary architecture, form increasingly follows finance, and in a society in which the ‘haves’ have more, and the ‘have-nots’ are ever more marginalized, he warns that contemporary architecture continues to stack up huge potential problems for the future, as housing costs spiral out of control, resources are squandered on architectural bling, and society fractures.

While this combative critique of the entire Modernist architectural project and its apologists will be regarded by many as highly controversial, Making Dystopia contains salutary warnings that we ignore at our peril and asks awkward questions to which answers are long overdue.  Given the unedifying later history of Modernist social housing in Britain, including exemplars such as The Crescents at Hulme, Manchester, Broadwater Farm Estate, Tottenham, north London, the Ledbury Estate, Peckham, south London, and culminating in the incineration of the Grenfell Tower, north Kensington, this courageous, passionate, and profoundly argued book should be read by everyone concerned with what is around us.

Professor James Stevens Curl has long established an international reputation for wit combined with compassion, thoroughness of research, sound scholarship, and lucidity of style. He has twice been Visiting Fellow at Peterhouse, University of Cambridge, and is a Member of the Royal Irish Academy, a Fellow of the Society of Antiquaries of London, and a Fellow of the Royal Incorporation of Architects in Scotland. In 2014 an Honorary Doctorate of Arts was conferred on him by De Montfort University in recognition of his “distinctive contribution… to the intellectual and cultural life of the nation and region.” On the occasion of its annual Prizes & Medals Ceremony in 2017, the British Academy awarded him the President’s Medal for “outstanding service to the cause of the humanities and social sciences” in his wider study of the History of Architecture, covering a vast range of periods and topics, in Britain and Ireland.

Copies of the book will be available for purchase on the night, from Oxford University Press, and also from all good book stores.