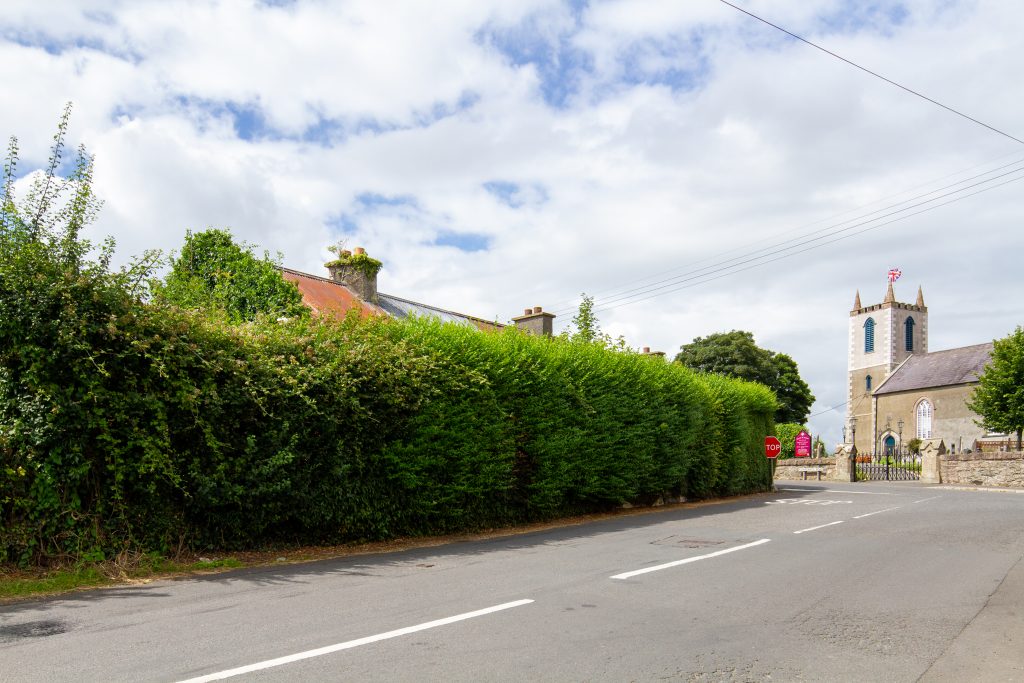 Thatch buildings were once synonymous with images of Ireland and rural life.  Natural materials, clay, lime, stone and straw and reed for roofing were cheap, locally sourced and sustainable in the 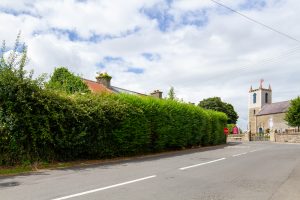 modern sense, but used historically to house families who lived a subsistence life. Today there is a certain amount romanticism about thatch buildings, perhaps even more so due to their rate of decline, but these buildings, in their day, took a lot of labour to maintain and heat. In the 1950s about 30,000 were thought to survive, but today only around 144 of those historic homes remain. Thatch under corrugated iron (colloquially known as tin) buildings, as in Kilmore, present another challenge  in terms of their true identity being hidden, often resulting in re-discovery of our past when the thatch in-situ is found. In the case of the Kilmore building, handmade straw ropes are still intact holding the thatch roof to the rafters. Here, as in many cases, survival has in fact been due to the tin overlay during its period of vacancy since the 1980s.

The Grade B1 building was listed in July 1986 and is described in its listing as a one and a half storey, five bay, direct entry house with corrugated iron roof covering over thatch with a harled and whitened wall finish. The house is a good example of a vernacular building of, at least, the early 19th Century which has been gentrified by the addition of the formal doorway. Its condition has deteriorated somewhat and the front elevation is now 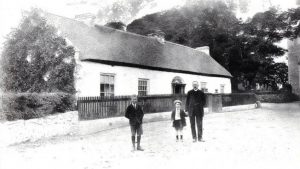 obscured by an overgrown hedge, while vegetation droops over the coping of the walled garden to the rear as well as creeping onto the chimney stacks. It remains a wonderful example of a traditional, though gentrified, dwelling and is far from being beyond sympathetic restoration. While the frontage is now obscured from view the jostle stones are still present on the corner of Kilmore Road that once protected the cottage from passing cartwheels.

There have been aspirations within the community in Kilmore to find a new life for the cottage for many years, but finding the long term solution for a building such as this has proved problematic. The Department for Communities: Historic Environment Division architects have been engaged with those involved to encourage repair and ‘meanwhile’ maintenance of the building and to find a sustainable use for the building with the assistance of many other groups. 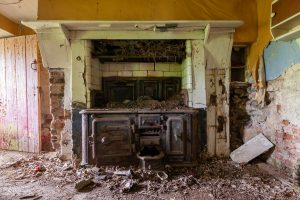 The cottage is owned by the adjacent Kilmore Parish Church. However, despite the cottage being valued locally as an historic building and with great potential to regenerate the core, community and character of a small rural village, the likely costs involved in restoring the building have been prohibitive as it will require substantial investment and support. Despite the understanding of the ‘conservation deficit’ lots of different possible uses have been suggested locally, from tourist accommodation and a coffee shop, to just restoring it as a dwelling. However, at this stage plans are in the formative phase and support is needed to undertake a viability study to identify which use will be most sustainable for the group involved to undertake.

Conor Sandford, a local resident and pioneer for the restoration of the cottage has kick started a campaign to raise funds for the project viability study by undertaking a sponsored run of 144 Kilometers; symbolising the number of known remaining thatch dwellings in Northern Ireland. There is no doubt that the character of many Ulster towns and villages have been degraded by poor planning decisions and thoughtless demolition of heritage 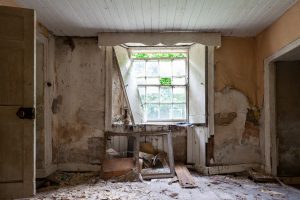 assets. Yet, it is clear there remains a passion and focus within those local communities to attract visitors and new residents through re-establishing local individuality and retaining historic character as an essential part of community revitalisation and regeneration; of which buildings like this cottage in Kilmore may hold the key.

If you would like to lend your support to Kilmore Cottage, you can do so here: www.crowdfunder.co.uk/kilmore-cottage-at-risk#start