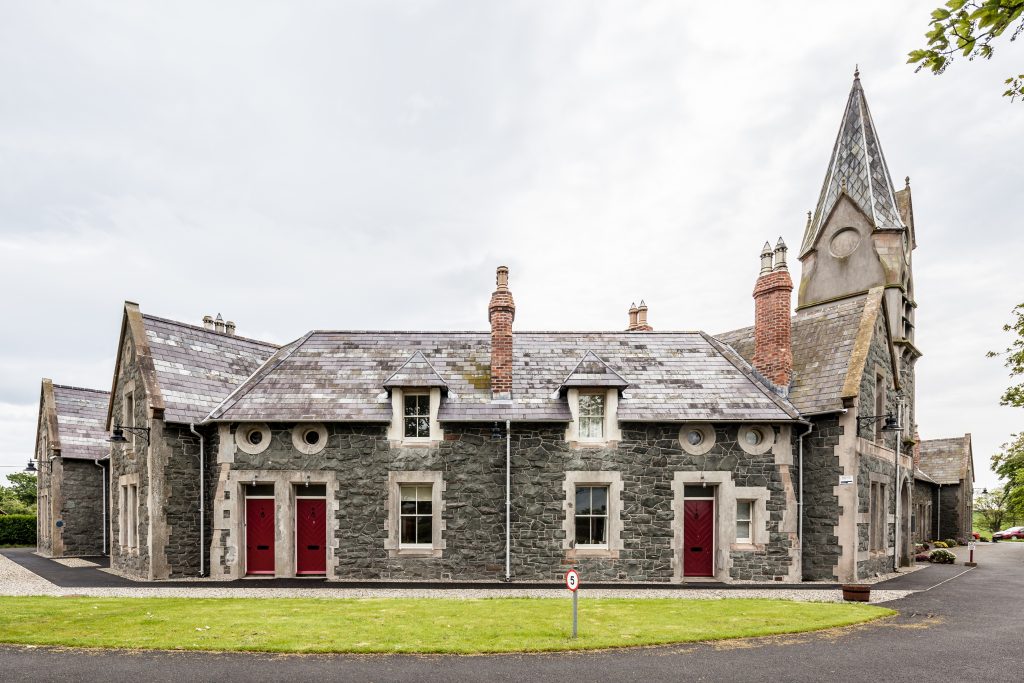 Built: 1868
Architect: by Lanyon, Lynn and Lanyon; with later additions by Young and Mackenzie
Type: Other
Killough
Newry, Mourne and Down District Council
Listed, Saved

Sir Charles Brett, writing in the UAHS Historic Buildings in towns and villages of East Down 1973 (p17) described the Killough houses as, ‘a remarkably extensive and well laid-out series of 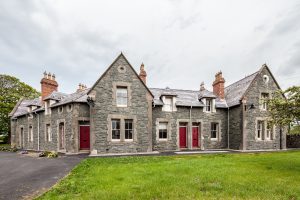 almshouses dating from 1868, with a pleasant bell-tower and detailing by Lanyon, Lynn and Lanyon; with later additions by Young and Mackenzie in 1912/13′. Built in greywacke and sandstone, the whole complex remains intact, comprising a horseshoe-shaped terrace centred around a superintendent’s house built in 1868, and two later sets of terrace houses, one added in 1883 and another in 1912.

Charles Sheils Esq. 1782-1861 was a man with a laudable vision to provide for his fellow man. A native of Killough, he spent most of his working life in Liverpool where he built a very successful trans-Atlantic mercantile partnership. He amassed a large fortune which he bequeathed for the construction of almshouses in Ireland. Mr. Sheils, who had a distinct social conscience stated in his will “I propose building alms houses…to relieve as many as I can of those who from their former lives are entitled to a better provision in old age than the Workhouse”. This was to be done irrespective of the religious or cultural background of the residents and, to this day, the composition of the management board reflects all of the three main churches in Ireland.

The executors of Charles’ will and codicil (1846 and 1858) were faced with a daunting challenge due to the complexities of his plans, but eventually succeeded in bringing his vision to fruition by 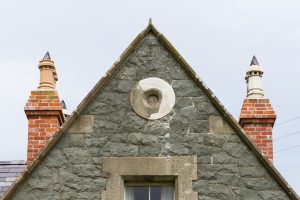 becoming a charity established by Statute under the “Charles Sheils Charity Act” of 1864 and amended by three later Acts. Five groups of almshouses were instituted under the provisions of his will – initially at Killough, County Down then subsequently at Carrickfergus, County Antrim, Dungannon, County Tyrone, Armagh, County Armagh and Stillorgan, County Dublin.

The Charles Sheils Houses in Killough have been providing charitable housing for the last 150 years. However, at the beginning of the 21st century, the future of this historic set of almshouses looked very uncertain. Due to many years of neglect and disrepair through lack of funding for ongoing maintenance, a third of the houses were in such a derelict and dilapidated state that they were added to the Heritage at Risk register in 2014. Speaking with Cathy Moore, Superintendent of the Sheils Houses in Killough she said “the Charity had to decide whether to abandon the site completely or invest a substantial amount of money for much needed restoration.”

The Grade B1 listed Killough houses comprise a well laid-out series of terraced almshouses, numbering 31 in total. The original group, No’s. 1 – 21, were constructed in 1868 and designed by Lanyon, 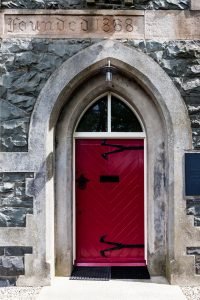 Lynn and Lanyon. The second group, No’s. 22 – 25 were constructed in 1883 and designed by William Henry Lynn (formerly of Lanyon, Lynn and Lanyon). Lynn was also a Killough man who was born at St John’s Point in 1829. The final row of houses, No’s 26 – 31, were constructed in 1913 and designed by Young and McKenzie who at the same time installed a full sanitation and gravity-fed water system which forms part of the complex’s additional industrial heritage significance.

The Charity provided free accommodation to those in need until 2004 when the first modest rents were collected from residents. Inflation, coupled with the necessity to modernise houses to acceptable modern standards, meant that the Charity would inevitably have run out of money without appropriate financial restructuring.

The phased restoration work commenced in 2013 with existing residents being accommodated during the works and decanted into newly renovated houses as the project progressed. Historic Environment Division’s files record the discussions between the client body, the architects and the conservation surveyor to ensure maximum retention of the historic fabric and acceptable and appropriate interventions to combine units and add extensions in the rear enclosed yards. The restoration contract was overseen by Chris McCollum of McCollum Conservation; Stephen Goodland of Donaldson Associates; with the on-site works undertaken by Joseph McClune and Sons.

The Charity availed of a series of funding grants from the then Northern Ireland Environment Agency, Garfield Weston Foundation, Wolfston Foundation, the Pilgrim Trust and the Clothworkers’ Foundation. However, in total, the Charity invested just under £3 million in the Killough restoration project. Speaking with Cathy, she said 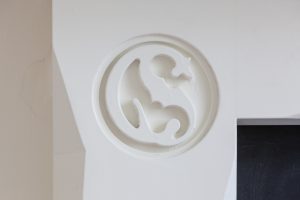 works ranged from “new rear extensions, refurbished and insulated roofs, to installation of up to date electrical, plumbing and sewerage systems, all while retaining the original function and character of the houses. All original doors, windows, fireplaces and fittings where possible were restored. As the works were ongoing, the Charity also restored the grave of Charles Sheils in the nearby St. Anne’s Church of Ireland graveyard.”

Cathy said “Following five years of restoration work, the Charity is now proud to offer the houses fit for purpose for residency in the 21st century while retaining the architectural quality and built heritage significance for the community at large. The restoration has also enabled the Charity to welcome a full complement of residents for the first time in many years” and celebrated the 150th anniversary of the Charity in June 2018 at the houses in Killough.

The Killough Sheils houses, like the other four complexes, are integral parts of the local communities in which they are located. Charles Sheils was ahead of his time and his vision for an ecumenical charity for those in housing need as set down in his bequest has lasted through the political, social and religious upheavals of Ireland’s history. It is an accolade to the Charity to have persisted and remained dedicated to the ethos of Charles Sheils by ensuring the survival of these buildings. The restoration of the Killough houses will ensure that Charles’ vision of helping those in need will continue for at least another 150 years.